It’s Management’s world you guys.  We’re just living in it.  She had the city re-paint the crosswalks at the intersection of Randlett/Waltham and Derby/Waltham. Not a bad little Tuesday. 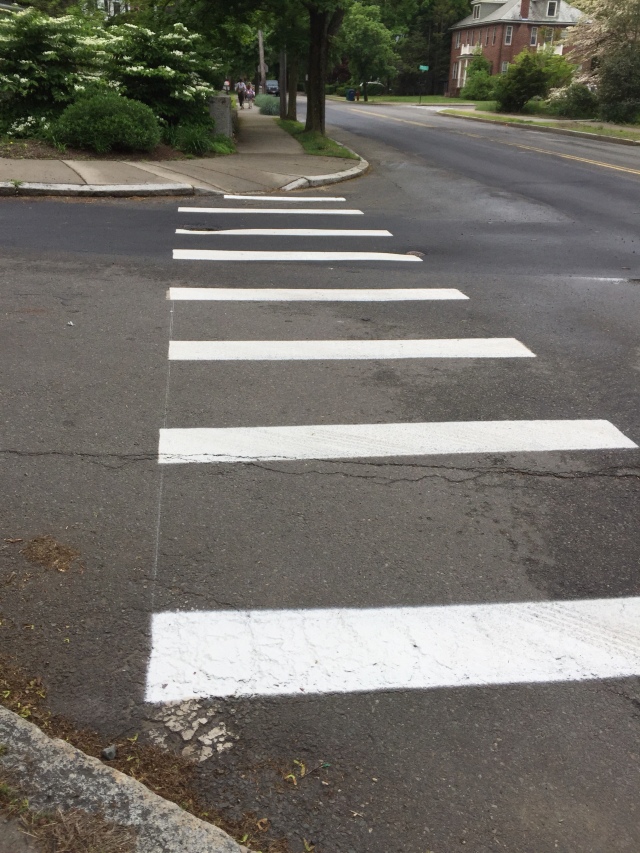 I don’t know about the rest of the internet but this blog will be closed tomorrow for the royal wedding.

Meghan Markle is an American princess and that Harry, one lucky guy.

I wasn’t always into royal weddings until the last one when Pippa Middleton showed up with those kids at her sister Kate’s wedding. 😍😍😍 you guys.

I didn’t even know Kate had a sister. Whose kids are those? Hers? That’s what I love about royal weddings — all the surprises.

And all the family drama. Like on those English period dramas that Management watches on Netflix called like The Duchess or Barrington Estate or Princess That Rules the Kingdom But Somehow Can’t Find a Suitor. So fun you guys and always in italics.

Management told me Meghan Markle’s family is a total shit show and has flown to London but is not invited to the wedding.  I don’t know if they can even do that but they just did. Maybe they saw the movie wedding crashers?

Newton is interested in finding out what’s important to residents regarding the development of the Washington St corridor.  If you have a moment, please visit the Hello Washington Street Facebook Page (link below) and take the 2 surveys.  Only takes a few minutes you guys for someone like me whose internet savvy.

You guys — Amy & Ingvar have finished their renovation at 40 and would like to meet everyone this Saturday. Please find a note from them below and take some time to check out their renovation. Bloody Marys? Think they’re gonna fit in real well around here.

We are having an open house on Saturday, May 19th from 9AM – 11AM. It will be very informal (we won’t even have furniture moved in yet) but we’re guessing that you’re curious to see the house project that’s gone on and on (and on and on). We’ll have breakfast snacks (munchkins or bagels), coffee and bloody marys. Feel free to forward onto any interested neighbors – we’d love to meet them.

Hope to see you next Saturday.

Julia Malakie, President of the Newton Tree Conservancy, is looking for volunteers. Drew can’t plant every tree himself you guys. 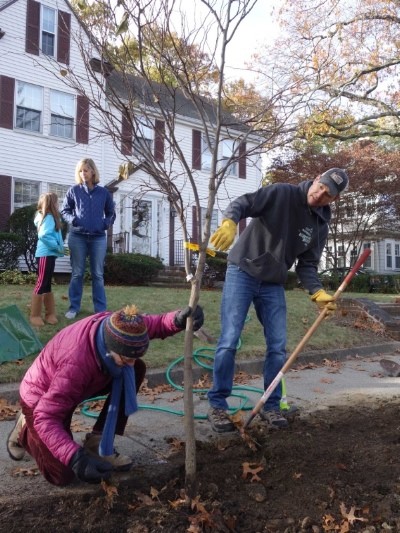 Anyway, volunteers will be needed April 28th to help plant more than 100 trees around Newton. Maybe Sarah will participate this time.

Start time is 8:30am and is expected to take 2-3 hours. The 2 nearest planting locations to America’s Favorite Street are Rangeley Road and the Fordham/Lodge neighborhood. For more details please visit the Newton Tree Conservancy’s site: 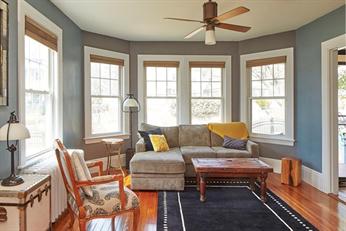 14 Dana Rd is a 4 bed/3 bath bungalow with 2,052 sq/ft. Nice house in the Franklin School district. Spring market is on you guys.

Wicked Local Newton posted a story this week about Erica Morin, whose husband Greg was killed in the Sweet Tomatoes accident two years ago. She is running the Boston Marathon to raise funds for Family Access, a non-profit that provides a social safety-net for vulnerable families throughout the most critical years of their children’s development.  You can find the full story here:

Please consider donating you guys. Erica lives in the neighborhood and could use our support.

Only took 1 weekend for 28 Eliot to find a buyer. June closing you guys. 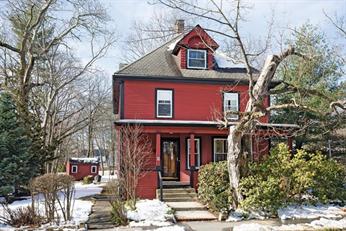 The real story here though is the lot size. Huge corner lot with .38 acres which means you could build an enormous house here.

236 Cherry St is a 4 bed/3.5 bath Colonial with 2,961 sq/ft. Pretty close to the corner of Derby, over near Franklin. The house is empty you guys and has been virtually staged. My biggest question is are there really 4 TVs in the basement or are those staged too? 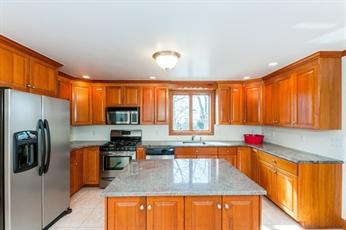 A woman walking her poodle this morning past 154 Randlett had her dog attacked by a pit bull living in this house. The pit bull had the poodle by the neck in the middle of the street. Only when both owners piled on the dogs were they able to pry the pit bull off the poodle.  Several people on the street ran outside when they heard screaming and saw the attack.

So sick of these attacks you guys. Please be safe with your dogs & kids around this house. 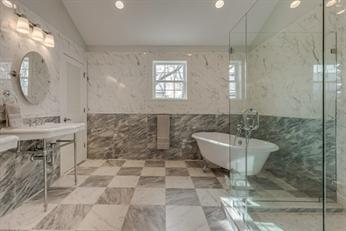 Happy MLK Day you guys. Management posted this 2 years ago when no one read the blog so here you again.

Many of you probably know that Dr. King had strong ties to Boston. In the 1950s, King studied at Boston University, where he earned his doctorate, and met his wife, Coretta Scott, a student at the nearby New England Conservatory. He returned to Boston in the 1960s on multiple occasions to address the State Legislature, lead a march from the South End to Boston Common during the early years of the public school crisis, and, later, to donate the bulk of his personal papers to BU.

But did you know he also had ties to West Newton? Our town and its Baptist churches actually have a long and rich history of connections to civil rights movements dating back centuries. Remember Nathaniel T. Allen, the abolitionist that owned the large yellow historic property on Webster St? Many of his friends were part of the congregation at the First Baptist Church, now Lincoln Park Baptist on Washington St. In the late-1800s, some members of First Baptist broke off to form the Myrtle Baptist Church, which is still located on Curve St. In the 1950s, a young Martin Luther King Jr. often attended services at Myrtle, preached from their pulpit, and visited with friends that lived in the surrounding neighborhood. Though Myrtle’s congregation suffered tremendous disruption during the extension of the Mass Turnpike in the 1960s, it remained a politically-active community during the racial turmoil of the later decades of the twentieth century. In 2008, thanks to the efforts of other Boston University students, the Myrtle Baptist Church was added to the National Register of Historic Places.

Check out the resources at the Newton History Museum if you want to learn more about the history of Myrtle Baptist, African-American history in Newton, or Dr. King’s connections to our city!

2012: The internet was still pretty new. I had to explain to a lot of you guys what a blog was. And possibly the internet as well. I was condescending about it. That didn’t help.

2013: Tried to get some fun stuff going like yard crawls & backyard movies. Problem was I didn’t have a lot of friends so mostly it was just me at these “events.” Andy would usually walk over to ask why I put my TV in the front yard. 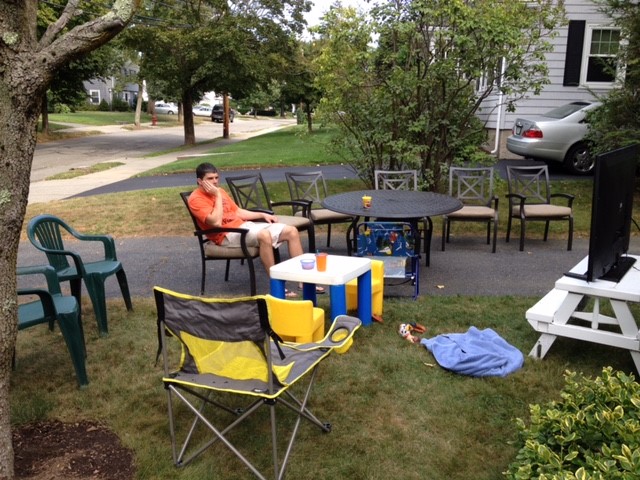 2014: A great blogging year until August when Keltic Krust closed then the wheels came off. Was so bitter I spent the rest of the year chirping Judy Baby to open Judith’s Kitchen then when she opened I only went once and was very fragile emotionally.

2015: The internet becomes available on cell phones. Up until 2015 you really couldn’t. If you wanted to read the blog you had to fire up your laptop. And if I’m being honest the writing wasn’t worth the trouble. I did a blog on memory foam bath mats and maybe you shouldn’t internet if that’s gonna be your contribution.

Blogged about my kitchen addition and Ed’s kitchen renovation.

2016: The year I became neighborhood famous. Over 17,000 page views. Management legit almost rolled her eyes so hard a few times in 2016 I thought she would need a specialist. People I didn’t know would stop me and ask if I was the blog guy. Then I’d be low-key humble about it. And Management’s eyeballs would disappear for a few seconds as they went all the way up & around then just pop up from the bottom looking more annoyed if that’s even possible you guys.

Blogged about affordable housing in W. Newton, the new huge development in Newtonville and a bunch of real estate stuff.

2017: Pageviews down from record 2016. This had more to do with people discovering social media sites like Facebook, Instagram & Tinder. Not because I only blogged like 20 times. Just felt like there was more competition on the net, as we in the blog game refer to it.

Blogged about a few home sales on Randlett and going to Cold One City.

2018: Not sure what the new year holds but this is my promise: Me and my 2 stupid index fingers will continue to write this blog as long as you guys continue to read it.

A concerned citizen just texted me this photo. 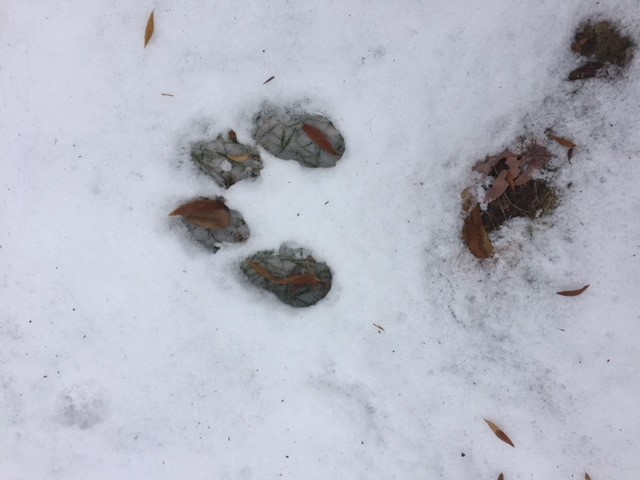 This paw print measures 5″ across and 4.5″ heel to toe. Very large.

Look you guys in order to track this beast I’d need to pick up some of the snow and smell it. Then observe the wind direction. Possibly look through binoculars as well.

But I can’t because I’m downtown at my super important job. Can anyone identify this? I think it’s a Yeti but could also be Bigfoot.

I knew this was coming. Just knew it. Coyotes are smart you guys. Think they don’t use social media? Well they do.

Already has 28 followers. And that profile pic? RUTHLESS. That’s somebody’s cat you guys. Brae Burn for lunch — I can’t even.

I like how I go to Bermuda for a few days to wear those little shorts & knee-high socks Management likes so much and nobody lets me know about this place. Makes me wonder how committed you guys are to this blog.

Anyway this house is so close to America’s Favorite Street (.com) you can hear our parties and smell our bbqs. 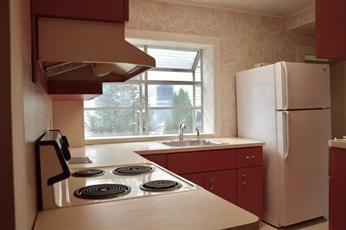 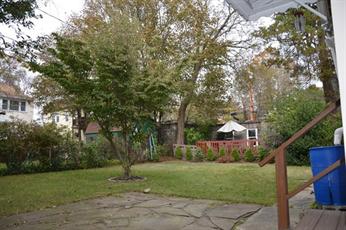