Many of you that go to BSC West Newton already know the spin studio is freezing. Yesterday it was 41 degrees. Today it’s 39. 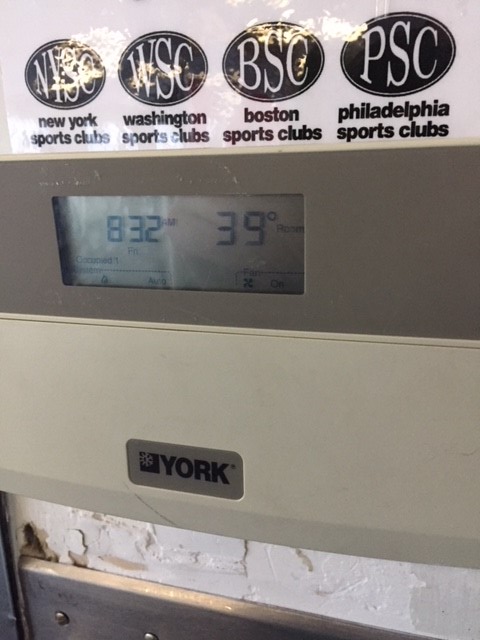 Management took a spin class there this week in her snow pants. Yesterday I could only do about 5 minutes of what can be VERY loosely called Krav Maga, the Israeli art of self-defense, before I got too cold.

Not only are the pipes in this building vulnerable to freezing, I am now vulnerable to  attack because I can’t practice my moves.

This has been a problem for months — the temperature I mean. When members complain to BSC management, they’re told it will be serviced and to STOP MESSING WITH THE THERMOSTAT. (I used all caps because members have been getting yelled at).

If anyone was ever foolish enough to complain about my moves, I can assure you the consequences would be severe.

Management (BSC’s not mine) had the HVAC system serviced yesterday. Slight problem is it didn’t get fixed and now it’s colder in there.

What’s gonna happen over the next week with a high temperature of like 15 degrees? It’s called a burst pipe you guys. And that’s when water bursts through the pipe it froze in and destroys everything like walls, floors, ceilings and also Village Bank below.

So RIP spin studio. And possibly the back half of Village Bank. This has been the longest, slowest, most avoidable train wreck we may ever know in West Newton.

A victory for the people today at Fairway & Bunker! Thanks to everyone for their hard work in making this happen. Stay safe you guys.

Newton Police announced, effective today through January 2nd, parking meter fees will not be enforced. Newton Police hopes this will encourage people to shop in our villages.  All other parking rules remain in effect you guys.

A concerned citizen just texted me this photo.

This paw print measures 5″ across and 4.5″ heel to toe. Very large.

Look you guys in order to track this beast I’d need to pick up some of the snow and smell it. Then observe the wind direction. Possibly look through binoculars as well.

But I can’t because I’m downtown at my super important job. Can anyone identify this? I think it’s a Yeti but could also be Bigfoot.

Gonna let Tamara explain this one to you guys:

Newton is starting a curbside composting pilot program in the spring. I would love for it to be successful so the program gets instituted citywide. In San Francisco where my sister lives, food scraps are picked up curbside in a bin, just like trash and recycling. And Cambridge is starting a citywide curbside composting program in April after a successful pilot program. I haven’t gotten my act together to start composting at home, so I would love to contribute all of our food waste to a citywide program. If you support the idea, please fill out the survey!

Coyote was spotted today around 1:45 on Randlett Park. No word where it was headed or what it thinks about the Pats red zone offense.

This morning Terrance (who lives at the corner of Waltham & Fairway) saw a 6th grader almost get hit in the crosswalk. As Terrance says “I see an almost everyday.”

5 Weeks ago the city agreed to install a bump out, speed signs and reinforce the cross walk markings. So far none of this has happened. Terrance e-mailed the city again this morning but he could use your support.

If you have not already done so, please e-mail the city to let them know these saftety measures need to be taken NOW. E-mails below.  Thanks and stay safe you guys.