And not like a couple of them. A lot of them you guys. The editor-in-chief at Newton South just posted an article about the prevalence of smoking & driving to the school’s online newspaper, The Denebola. Here’s the link:

And here are some highlights:

Happy Friday and Go Lions! I mean is there anybody more ready for the weekend than the kids at Newton South? Gotta get high and drive all over town. Totally safe you guys. It’s not like they’re drinking AND smoking. That would be stupid. Just smoking.

What’s the worst that could happen? You drive down the sidewalk and hit somebody standing in front of the Cherry Tree then run your car into the restaurant like this dude? This driver was high. Not drunk. Relax — it’s not like anybody got killed you guys. 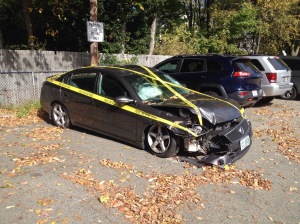