We’ve joked that our kitchen was designed by someone who had never used a kitchen before – riddled with “choke points,” a “fridgehole” (it’s a word, or at least it should be) narrowing our choices to one model of refrigerator, and an oven with a vent to … actually, I’m not entirely sure where—and basically tried to stuff the “elements” of a kitchen into a narrow space.

So we had the makings of a kitchen, just not a very good one. We also had some sweet faux Mexican tiling. A 2009 painting of our cabinets bought us a few years, but we finally decided it was time.

Unfortunately, we decided it was time at a time when there were no contractors available. The winter of 2015 pushed back every good contractor—so anyone who was available, well, sucked. Those who were good were booked for some time. So we found someone good—and waited.

Let me tell you—stuff got real fast. And what I’m going to tell you isn’t going to be news to anyone who’s undergone the process. Ours is a little more complex (opening up into the living room; moving some additional doorways; elevating the sunroom that was haphazardly added on by somebody, at some point, from what the City technically would classify as a “shanty,” “lean to” or “flower box” into an actual room with walls) … but we can handle 10-12 weeks without a kitchen. 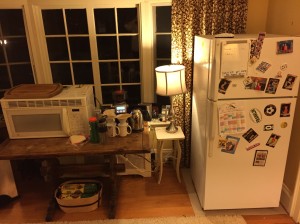 We’re through two weeks. Only a few surprises thus far (“Hey! There’s a stack pipe where that new door was going to be! It’s not just an ornamental stack pipe, is it? Because that would be awesome.” “Oh, that was a load-bearing wall. Oh, the 1980s bathroom renovation removed elements of an important load-bearing beam.” “Oh, there’s a gas pipe 6 feet above the sink I planned to do dishes in for the next three months … and I’m 6-foot-6. The bathtub is cool, right?”).

Figure 2: Clearly, this is a good long-term solution.

Here’s a list of things I didn’t expect (yet probably should have) going into this:

So far, we’ve set up a temporary kitchen in the living room, and thanks to our outside grill, a good toaster oven and a borrowed microwave, avoided the lure of takeout food … so far. Check back in a few weeks when, if the Editor allows, I’ll update you. And likely ask if I can bring over a box of dishes to wash.