Talked to Pete today and got the final tally. Our original estimate was $112k — not including appliances or light fixtures. This estimate was for a 21 x 8′ addition that included a new kitchen, mudroom & half bath. Final cost is $120k you guys.

We had some extra work done that added to our cost overrun. Most of the overrun was because we spent $19k on cabinets (budget was $15k).  Also dropped $5,200 on marble counters. Only the best for Management.

There were no surprises which helped. During demo it appeared we had asbestos shingles but Pete had them tested and they were asphalt. Remediation would have been a couple thousand. We also planned to have the drain pipe for the upstairs bath replaced, since it ran right through the kitchen to the basement. But Pete said it was cast iron and in good shape. That would have been another few thousand.

Pete kept us on budget. Anytime we asked for something he hadn’t planned on, he let us know and told us how much it would cost. He would say that’s gonna be expensive, then tell us it was $500. Which I appreciated. Cause at the end of the project, all those $500 extras add up.

Probably gonna be the last blog about the kitchen you guys. Management may do a guest blog in the next few days. Overall, love the new kitchen and my TV above the fridge. Very pleased with Pete as well. Highly recommend him. 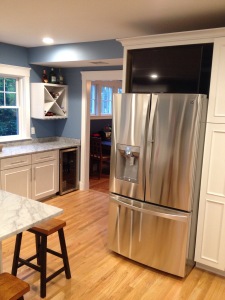