Guest blog from Ken at #146 you guys.  Good stuff about trees.

Early this past summer, I saw black carpenter ants wandering up and down the tree in front of our house (and even across the street to the tree on the other side). I called the City and found that since the tree in question is on the berm between the sidewalk and the street, it’s really the city’s tree, and they’ll take care of it as needed. Well, the guy from the Forestry dept (part of Parks & Recreation, as far as I can tell) told me a big chunk of the tree was unhealthy (we could see inside a major split of a large arm of the tree). The arm in question was over the front yard, so it likely wouldn’t have dropped on my car or in the street – but no point in waiting to see. Since I hadn’t heard anything more, including any timeframe for the work, I called them again a few weeks ago. This seemed to remind them of the attention it needed.

Newton contracted with Northern Tree Service. Two guys, 2 trucks, couple hours on Tuesday morning last week, and the suspect arm of the tree was no more. And I had a couple hundred pounds of wood to season for burning next winter. Simple! So: gentle reminder, if you have questions about the health of a tree between your sidewalk and the street, don’t shell out your own money to treat it, call the city of Newton first. 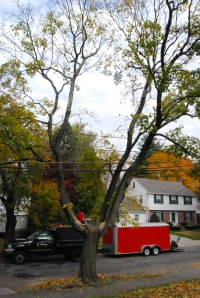