An oil to gas conversion is underway on upper Randlett.  The homeowner, herein after referred to as Guy, is having the following work done:

Guy already has gas in the house — so they won’t have to bring in a new gas line from the street.  Contractors are telling Guy the job will be done in 2 days.  Guy says maybe 3. Mass Save rebates total $1,100 — according to Guy.

Here’s the before shot.  Check out this old oil furnace — looks like one of Bill Gate’s first computers or like a giant hotel ice maker.  Hope to have an after shot for you guys on Friday. 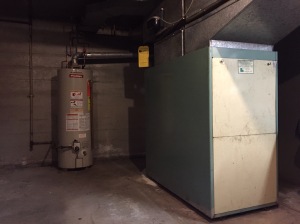