Since moving in 4 years ago, we’ve spent about $75k on home improvements.  The best money we’ve spent (by far) was on central air conditioning.  (The new roof is nice but it’s not like people come over and say “hey, nice roof.”)

With a toddler and infant, and the prospect of another sweaty summer with no one napping, Management green lighted central air installation.   This was March 8th, 2011 — now referred to as the Greatest Day of My Life.

I called 3 different contractors for estimates.  I spoke with Jeff Lawson of The Lawson Companies and here’s how it went down:

Jeff: “Do you have 200 amp electrical service?”

Boom!  4 days later we had central air.  Jeff and his guys were great.  Did all the plumbing, electrical and duct work without making a mess OR disrupting nap time.  Clutch.

Don’t forget Mass Save will give you a rebate of up to $500 for central air installation! 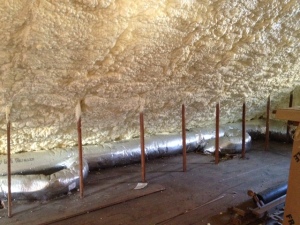